Let’s move forward to meet the ever- changing needs of today’s families.

Several months ago I was in contract negotiations with one of our larger employers. One of the company’s negotiators informed us that he would have to end at approximately 3:00 PM that day. After being pressed why, he finally admitted that his daughter played sports and that she had a game that evening that he had to attend. He also admitted that he was reluctant to tell us because he didn’t know how we would react.

Yet, he wasn’t the only man in the room who was facing work/family balance issues. One of the attorneys’ explained how, each month, he and his wife struggle to plan their children’s hectic after school schedules. Every day, they try their best to attend their children’s event or escort them to practice. Another man pointed out that due to the hospitalization of a family member, that he would not be available for one of the scheduled meetings.

I chuckled at first, as I thought of the numerous times I found myself in this position as I was raising my daughter, as well as the countless number of working women who came before and after me.

Juggling child care and family related issues can be stressful for both men and women and while I’m happy to experience this cultural shift among my male colleagues and associates, I have no doubt that these men are more involved with family responsibilities than previous generations of men. The American workplace remains stuck in the 1950’s. It’s still operating on the model of Dad as the family’s breadwinner and Mom staying at home to take care of the kids. Today women comprise over fifty percent of the workforce. Despite these changes, women are still viewed as the main child care provider and are therefore expected to take time away from paid work, causing them to receive less pay and overlooked for promotions no matter how hard they work or express an interest in moving up the ladder.

Traditional attitudes and stereotypes have also prevented some men from requesting time-off, flex time, and less traveling. Like women, these men fear not being taken seriously, overlooked for promotions, and not being considered “one of the boys”. It is important that everyone recognize that work conflicts are both women’s and men’s issues, and I urge all men to join or continue this conversation, both inside and outside of their workplace, so that we can move forward to meet the ever- changing needs of today’s families.

NOW IS THE RIGHT TIME FOR EQUAL PAY FOR EQUAL WORK

Several months ago, I was elated when California, Illinois, and New York joined Connecticut, Delaware, North Dakota, and Oregon in passing laws that require women to be paid equally for work that is, “substantially similar” to that of their male co-workers. The laws also places safeguards to ensure that employers do not retaliate if their employees openly discuss their wages or inquire about their companies’ pay practices. Effective January 11, 2016, the laws also allow the Federal government to ban federal contractors from disciplining or firing workers who make inquiries about their pay.

While these measures will help close the gender wage gap, we need more states and Congress to step up and pass paycheck fairness laws. Over two-thirds of American families depend on women’s economic security in order to survive; yet, women make 79 cents for every dollar a white male earns. Black and Latina women make even less at 63 cents and 54 cents respectively, and the conditions in Canada pretty much mirror U.S. trends. Non-union women are also less likely to have paid sick, personal, and family medical leave, which also places an additional burden on the family.

Our nation’s lack of work-family policies have led many to justify the gender pay gap based on a number of factors, such as the concentration of women in traditionally female-dominated occupations, length of work experience, and time off for maternity leave or child care.

During a speech at a recent event co-hosted by the National Women’s Law Center, AFL-CIO Secretary-Treasurer Liz Schuler stated that, despite discrimination, women frequently: “go along to get along.” Ms. Schuler asks working women to tell their stories and unite behind a policy agenda that gives them more rights on the job and more freedom in their daily lives. 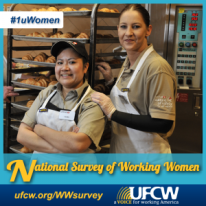 I urge my UFCW Sisters in the United States, if you haven’t already, to take the AFL-CIO’s Working Women comprehensive survey that can be found at ufcw.org/wwsurvey . I took the survey and so should you! The survey will give you the opportunity to have your voice heard about the challenges you face as working women.

While we applaud those elected officials that have helped pass equal pay laws, women must continue to stand up and speak loudly until others wake up and realize that paycheck fairness and work-family policies can only strengthen the economic security of our families and our nation’s economy.