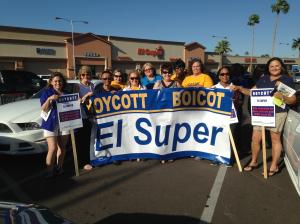 The boycott has now moved to Phoenix, Arizona where stores are also being picketed. The El Super market workers, along with community organizations, endorse the call to boycott El Super markets. They have come together because despite huge profits, El Super has continued to refuse to negotiate a fair contract in Los Angeles, California. Hundreds of picketing workers, faith leaders, the United Food & Commercial Workers and community members will continue to boycott until workers achieve their core goal of winning respect and a fair contract.